Mary Alice (Myers) Platt was born on October 16th, 1934, in Marshalltown, Iowa; She was the daughter of Ray E and Elva Alice (Allen)Myers. She attended Marshalltown area schools. It was at the Marshalltown roller skating rink, where she worked for Fran Platt, that she met her husband to be. On December 28,1953 she and Charles Platt were married in Marshalltown, IA. Following their marriage they farmed with Chuck’s brother, Mark and made their home on the family farm near Iona, MN. Farming continued and in 1965 they relocated to Slayton, MN where they built the first car wash in SWMN; the Family Car Wash. Mary managed the car wash and was known to be proficient in pulling off pumps and motors when repairs were needed. Enjoying the life of business and sales, Mary later worked at McCormick’s Appliance in Slayton, MN for several years. In later years she joined the activity dept. staff in providing meaningful activities for those residing at Slayton Manor LTC facility. She enjoyed her position but due to Chuck’s failing health moved on to being #1 caregiver for her husband and excelled in this task as well. She relentlessly cared for him until he passed in 2016. Mary had a zest for life and enjoyed spending time with family and friends. Over the years she maintained her friendship with her Iowa “besties” Joann Erwin and Merlene Halboom. Her favorite pastimes over the years included dancing, travel, sewing, crafts, roller skating, canning, reading, oil painting, and walking. She was often seen in the community walking her dog, “Charlie,” her favorite companion after Chuck’s passing. They were a perfect match. Mary passed away at her home surrounded by her loving family December 8th ,2022 at the age of 88. She was a member of St. Ann’s Church in Slayton, and a member of the St. Ann’s CCW. She volunteered as a catechist. Mary’s faith was especially important to her. One of her most treasured items was the bible she received from her husband to be, always making sure it was close by.   Survivors include her four children and their spouses; Chuck Jr. and Pat Platt of Slayton, MN, Rick and DeEtte Platt of Iona, MN, Denise and Joe Carlson of Iona, MN, Alice and Pat Heard of Lake Wilson, MN; fourteen grandchildren and twenty-four great-grandchildren, and many nieces, nephews, and their families. In death she rejoins her husband Charles Platt Sr, infant daughter Diane Mary, her parents Ray and Elva Myers, grandson-in-law, Brandon Krumwiede, brothers Alfred Moore, Robert Moore, Glen Moore, Jim Wood, and sisters Dolores Smith and Peggy Schollenbarger, their spouses. Blessed be her Memory.   Funeral services will be at  St. Ann Catholic Church in Slayton, MN on Friday, December 16, 2022, at 10:30 AM with Fr. Thien Nguyen officiating. The organist is Christie Gergan. The song leader is Sheila Crowley. The pallbearers are her grandsons, Lance Platt, Shawn Platt, Derrick Platt, Isaac Carlson, Curt Heard, Dale Heard, and Michael Heard. Interment is at St. Columba Cemetery in Iona, MN.   Visitation will be at St. Ann Catholic Church in Slayton, MN on Thursday, December 15 from 4-6 pm with a prayer service at 6:00 p.m. visitation will also be hour prior to service at the church on Friday. Totzke Funeral Home of Slayton is entrusted with arrangements. To view online obituary and send condolences visit totzkefuneralhome.com 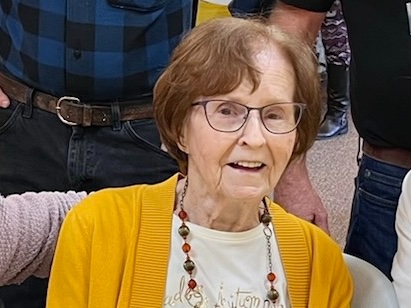